If it wasn’t clear from my previous posts, most recently the one about Dreamlike Gaming (congrats on the new store guys!) I’m pretty well into the Warhammer/Warhammer 40k hobby now.

Over the last couple months I’ve built two 40k armies.  One went along with the release of the new Dark Angels codex.  Dark Angels are troubled and all about smiting chaos (with their own flaws so that makes them interesting) not to mention a super-cool robed look.  I love my Dark Angels army and pics of them will be coming soon.  However…my favorite 40k army is orks.

Orks are a great horde army.  All movement and weight of fire.  They have a terrific all-id attitude and slight regard for personal survival; it’s all about the good fight.

One of the tragedies of the orks is their slightly humorous persona.  Orks ARE funny and I do love that about them, but their cockney slang accents and brutish attitude usually make them difficult to tell entire stories for.  I’d hate to see them lose their sense of humor but I’d like to see some good, long narratives from Black Library about them.  Like Rodney Dangerfield….they get no respect.  Except Ghazghkull..  If you don’t believe me read Chains of Golgotha and see how menacing this guy is.

My favorite tabletop aspect of orks is their junkyard tech.  They can make things work just be believing they work, and can “loot” vehicles from other races, make ’em orky, and use them under the “looted wagon” codex profile (btw orks REALLY need a 6th edition codex…c’mon Games Workshop!)

Keeping this in mind I was able to get my hands on a Chaos Defiler for a discount price and, as I truly despise the traitors, I knew I’d never use it in a chaos army…but I could loot it!

Since it’s half Deff Dread and half Trukk I dubbed it the “Dreadtrukk.”   It has parts of a Chaos Defiler, Battlewagon, Trukk, Land Raider Crusader, Wartrakk, Dakkajet, and Warbike to name a few.

Attached are pics of my looted Chaos defiler.  It was a challenge to build, but I created it under codex rules and gave it:

The lower “jaw” is obviously the reinforced ram from the battlewagon.  Believe it or not it is held in place with the left “arm” weapon of the Chas defiler left in two pieces.  It worked remarkably well. 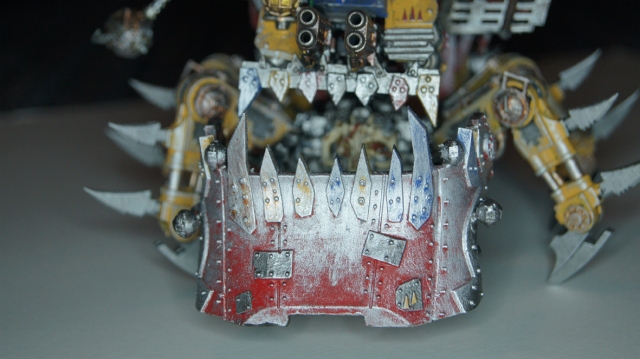 The Skorcha is actually the Flamestorm cannons from a Land Raider Redeemer.  I made the Crusader variant but liked the look of the flamer so I was glad to use it.  The turret still raises and lowers slightly which means the jaw actually “works.”

Inside the “mouth” is a ram head from a warbike. 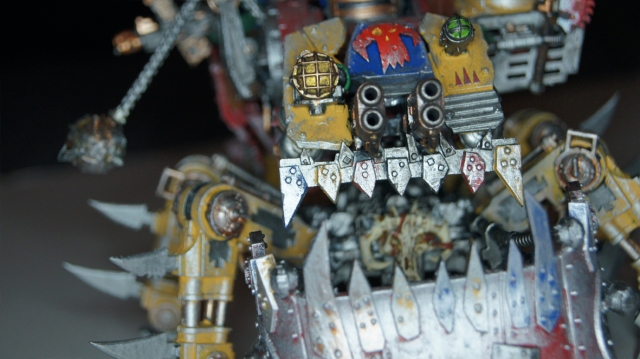 The boarding planks I attached to the back of the trukk bed rather than the sides.  Since the legs are on the sides it gives a bit more range, plus they can board whatever is “grabbed” by the Grabbin’ Klaw.  For the Grabbin Klaw I used the claws that came with the Defiler and laid the trukk bed on top of them.

The “commander” is a nob with a stormboy head in a cupola made of Killa Kan shoulder pads an a vision slit.

The left side gunner is from the old Wartrakk set, I made a skorcha out of that too so I had him left over. 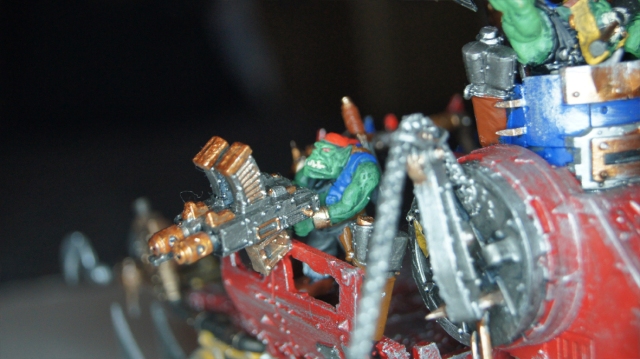 The right gunner is a “big shoota” boy with a nob head (no laughing!)  I was very please with his posing, the big shoota held wildly in one hand and the human head held high in the other.  I gave him a bloody chain axe just for fun.  His “turret” is made of left over parts of the Dakkajet, a bike tire half, and Killa Kan parts. 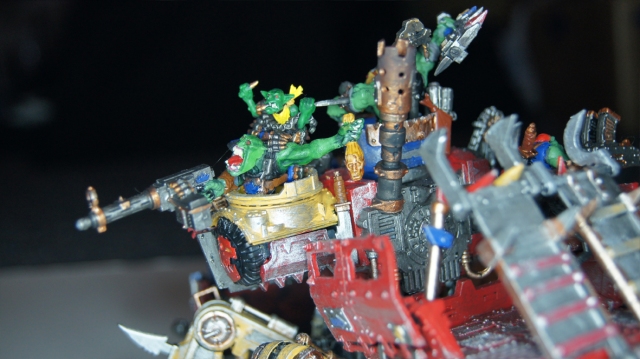 I admit I like my orks “dirty” and scratched up even when bright and flashy.  I had it painted in a nice pristine color scheme but didn’t like it until I scratched it to kingdom come with Necron compound.

I have another looted wagon I actually like better.  A typical Leman Russ wth a boom gun.  Pics of it and my custom warboss, Grimskragg Defftrigga, coming soon!

The content contained on this website, including but not limited to all writings and drawings, are the original creations of their indicated authors. Those authors retain all rights to their creations permitted by law. The content contained on this website and webpages may not be republished, rewritten, reproduced, or appropriated in any other way without the express written permission of the work’s indicated author. We don't mind sharing, but please credit the writer. Stealing and plagiarism are not cool.
Loading Comments...
Comment
×
%d bloggers like this: