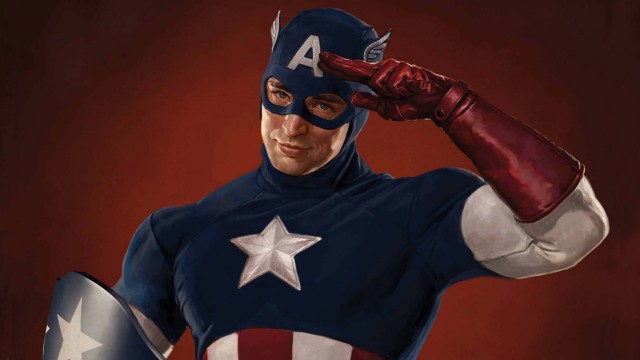 I recently enjoyed an MCU marathon this weekend just to prep for Civil War and it occurred to me that not only, and completely surprisingly, are the two previous Captain America films my favorite sub-franchise in the MCU, but that Cap himself is also my favorite character as well.  Something wholly surprising.  I thought I’d take a look at why both he and his movies have become my favorites.

What makes the Captain and Steve Rogers almost unique in his films is his personality is entirely heroic.  In the first film Rogers is physically frail but has a hero’s heart.  He’s genuinely a good person, something that most superheroes and superhero movies lost sometime in the 90s.  I can remember in the original Men in Black Will Smith’s character mocking the rigid, goody-two-shoes soldier as “Captain America.”  A term that has been largely pejorative as angry, anti-heroes started to co-opt the protagonist landscape.  The idea of the “truth and justice” hero was passé and viewed as simplistic.  Heroes needed to be dark and laconic; almost as bad as the villains to be “cool.”  There was a movement in all of entertainment to shift from the classic “babyface and heel” dynamic (god help all of us who remember the “Attitude Era” of pro wrestling…) to ALL heels, just some are fighting with us and some against us.

It’s a mood that has both carried forward and evolved as films have.  Look how dire and cheerless the Christopher Nolan Batman movies were compared to even the abstract mind of Tim Burton’s.  Even Marvel’s character, who are by-and-large a lot more dynamic (meaning capable of more than two emotions often displayed in DC movies, those being misery and rage) tend to have these traits.  Let’s just look at Rogers’ fellow Avengers at the end of Phase 1.

Essentially they’re all deeply flawed people, “good guys” but the kind of good guys we’re used to seeing nowadays with mixed motivations and lurking dark sides.  Even the Guardians of the Galaxy, who I adore, are all maladjusted outcasts ranging from thieves to murderers, whose negative personalities are mitigated through the humor of the storytelling and their charming personality quirks.

Then there’s Steve Rogers.  We know from the first film he selflessly wants to volunteer for combat in WWII, specifically in the unit in which his father served and died in during WWI.  His motivations are clearly stated as “men are fighting and dying, I got no right to give any less.”  He’s beaten up for his early attempt to stand up for what’s right, even if it’s just to shout down a movie heckler, and throws himself on a grenade during training.  You get the impression that there is a sadness lurking in Rogers and that maybe he’s eager to die heroically after losing his parents and being the little guy in a big mean world.  His obsession with inadvisably joining the army and even volunteering for an experiment with potentially catastrophic consequences shows he has kind of a “nothing to lose” attitude.  And that could have been the “dark side” motivation assigned to him by a lesser team of filmmakers.  There is, however, one statement that proves this aspect of Rogers’ character to not be his main impetus.  So what does drive the First Avenger?

I don’t like bullies…I don’t care where they’re from.

When poignantly asked by Dr. Erskine if he wants to go kill Nazis this is Steve Rogers’ response.  He’s been a victim of bullies.  He doesn’t have a desire to kill them, or even to fight them, he just doesn’t want anyone to get pushed around.  That sentimentality doesn’t change from when he’s a scrawny fellow being punched in an alley to when he’s a super-soldier going toe-to-toe with an entire rogue Nazi Science Division.  And what a sentiment to have.  Having been the little guy he’s always just wanted to be the one standing up for the little guys and through the narrative gains the ability to do so.

Rogers is an optimistic hero.  Not one born to be a hero or who goes through a startling 180 degree revelation that provides his heroic compass, like many of the other Marvel characters.  He starts with the moral compass and finally gains the power to act on it.  This isn’t saying he doesn’t deal with tragedy.  He’s an orphan, his mentor and the first person to really believe in him dies.  His best friend becomes a casualty of war.  He never gets his dance with Peggy Carter.  And yet…none of this tarnishes his beliefs or changes his motivation.  It would have been easy for him to chase down and ruthlessly kill the Hydra spy who kills Erskine, if it weren’t for the latter’s last request being a reminder to Rogers to stay a good man.  It would have been simple for his drive against the Red Skull to be motivated by vengeance for his fallen friend, instead he acts completely selflessly again to save the world not seek revenge on the bad guy.  Even though he misses out on perhaps the love of his life, it doesn’t stop him visiting her decades later and still call her “his best girl.”

In a world of miserable, po-faced anti-heroes I find Captain America breathes life into the classic concept of the hero.  Not because he’s “good at everything” because he’s clearly not (becoming a super soldier didn’t make him any less socially awkward and he plays in a certain league; Asgardians can still knock him for a loop) but because despite everything he goes through he still tries to be as good as he can and to do what’s right.  And that’s ok.  We need that to offset the number of heroes who have been made brooding and dark.  We need Leonardo to offset Raphael.  Too many heroes suffer from deep emotional issues and have been turned into shadowy, twisted versions of themselves in a desperate effort to be “edgy” in the perverse belief that it makes them more “complex.”  It’s refreshing to see good guys can still be good.  Hell even, Superman, the cultural icon of truth and justice, is a wretched, blue-tinted, humorless bastard in his latest incarnation.  It’s a palpable relief to see Captain America be, well Captain America.

So we know why it’s refreshing to have an old-fashioned hero on film, but why are his movies so good?  We’ll take a look at that next time.