Villainy and villains.  Often we find them more compelling than the heroes of the story, even when we crave their defeat.  There are many kinds of villains and many great ones.  They can be tragic heroes or pure chaotic evil, so classifying villainy can be difficult.  James Rolfe did a great list of the “baddest bad guys” using the criteria of who was really the “baddest” not the best villain or most evil, just the one who was through and through…BAD.  He made a great list and it’s hard to disagree with his findings.

Following in his footsteps, and wrapping up the three-year anniversary month of threes, I thought I’d do my own criteria and give what I see as the most intimidating and imposing villains I can think of.  The criteria here are a little more difficult to ascertain, but intimidation is rarely strictly physical.  Once we leave the school yard the threat of “I’m big and gonna beat you up” doesn’t have the same weight as it once did.  This immediately discounts the Jason Vorheeses and Godzillas of the medium.  Similarly intimidation and having an imposing personality is usually just that, personality.  The fact that these villains are human and show their humanity makes their villainy more imposing.  It might seem a bit convoluted but hopefully the selections will help explain.  So starting off with number three: 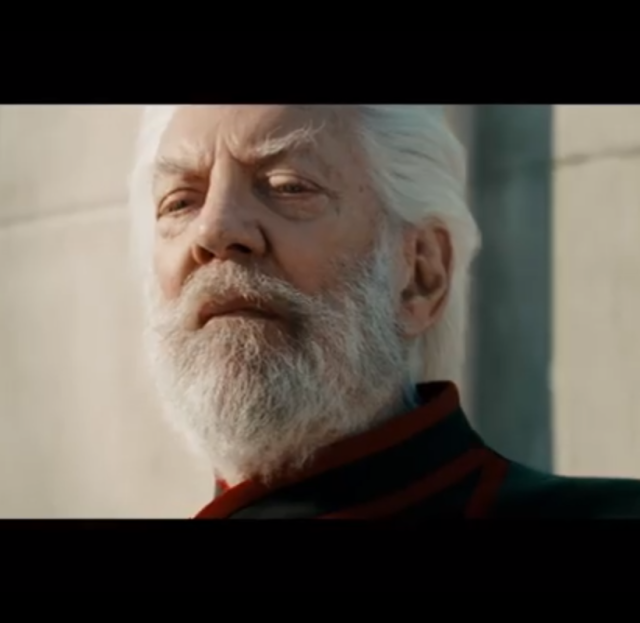 Before hipsters start to protest I ask everyone look the man himself.  He is, in the world of Panam, supremely powerful.  He has a family we see in his periphery and a public persona that is both calming and resolute.  Then you see him interact other characters, Seneca and Katniss were frozen like the prey of a cobra.   Plutarch, despite his confidence, maintained his composure by attempting to play Snow’s game his way to impress him with his own imposing declarations.  In the books we see more of him, hear from him more, and get to know him more.  His limited use in the films makes him even more intimidating.  Sutherland plays him in a manner as cold as the character’s namesake.  He speaks with a quiet voice, like thunder in the distance, so when he merely suggests it would be easier if parties agreed not to lie, explains it is not favorable to root for the underdog, or instructs you on the value of hope versus fear you listen.  Wide-eyed and terrified at nothing more than the power of his…words.  His intimidation is based entirely on his ability to tell you the truth in ice-cold realism with the absolute knowledge of what he can do.  He can make you vanish in silence, make you obsolete in front of a roaring crowd, and send you into hysterics with a flower delivery.  He’s that imposing. 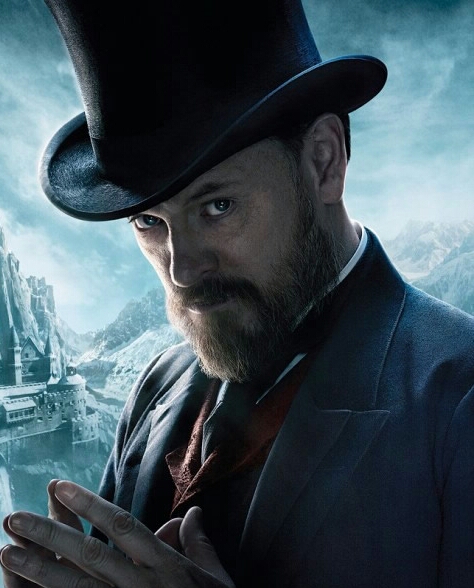 “Rest assured, if you attempt to bring destruction down upon me, I shall do the same to you. My respect for you, Mr. Holmes, is the only reason you are still alive.”

How can you gone wrong with the Napoleon of crime?  I’ve seen several versions of Dr. Moriarty and Jared Harris captured something that I found truly captivating.  His Moriarty has an extreme patience and remarkable Zen-like nature that makes him even more frightening than Hannibal Lector.  Moriarty’s intimidation is that, portrayed in the manner Harris played him, you feel he’s smarter than you.  It’s not a physical intimidation, because as I said above what does that mean to grown people?  It’s a feeling of helplessness that even Robert Downey Jr.’s Sherlock feels during parts of the movie.  You feel at his mercy, as though he holds every card and you hold nothing…even if you’re holding everything.  Anyone who has ever been in the presence of a real master knows this form of intimidation.  And we’ve seen the result of someone far below their league when they attempt to compete.  Moriarty is so wily he forces Holmes to chase a red herring at the opera just so he can watch him fail from a box seat.  He attempts to start World War I and simply shrugs when he doesn’t pull it off.  He can torture you singing opera in German…and just might be able to take you in a fist fight too.  I’m not sure I’ve seen a more impressive supervillain…certainly not one who was this cold, this brilliant, and this realistic.  Harris’ performance is wildly underrated and for me he’s the Moriarty to beat. 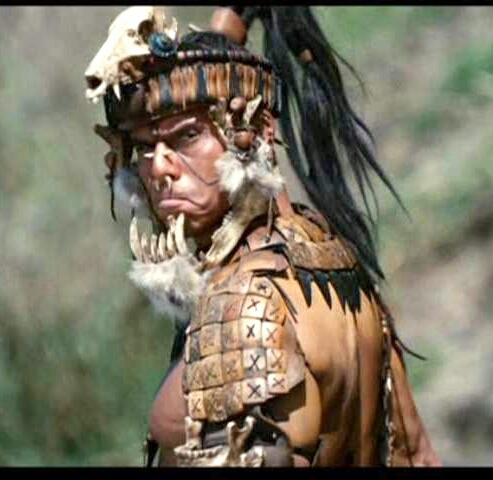 I don’t believe I’ve seen a character on film in recent years quite as intimidating as Zero Wolf.  Mel Gibson’s Apocalypto received general indifference after its release.  It was in Mayan.  Directed by a man who had just gone through some serious personal issues.  It had questionable historical veracity.  But forgotten amidst all of that is what an incredible film it is.  The film revolves around fear (The Nolan Batman films could have learned something about real fear in this movie…), specifically fear instilled into a small village by warlike, desperate neighbors who seek human sacrifices.  The leader of these hunters: Zero Wolf.  Decked out in jaguar jaws, wolf skulls, and human bones he is a massive, brutal, cunning leader.  Since we spend most of the film in the captivity of these hunters or fleeing them, they had to represent a truly incredible threat and, though there are numerous hunters, they all fade into the jungle when in the presence of Wolf.  He gives commands silently (watch his directive to his men to spread out and attack), can intimidate with few words (“Are we doing what you say now?  Shall we try that?”), exudes power and menacing intent through extreme calm and stoicism, and is powerful enough to force that stone knife right through your sternum.  More than just a vicious hunter you see he is a person.  He has a son he cares about dearly and it’s both tragic and frightening when he is provided the motivation to relentlessly hunt Rudy Youngblood’s Jaguar Paw throughout the latter half of the film.  It’s this humanity that makes him such a cold customer.  He cares about his legacy and his offspring, but is simultaneously ruthless in the prosecution of his tasks.  He is a man hunter, and he treats it like a passionless day job, until it’s made personal.  Both his indifference and his cruel obsession cause tension in their own ways.  Zero Wolf is possibly one of the most effective villains in years and he is used with remarkable skill to drive the plot, dramatically increase tension, and intimidate the audience.  He’s intimidation personified and the most imposing villain I think I’ve ever seen.