What is the riddle of steel?  The 1982 film asked this question in some of its first spoken dialogue, in 2011 it is asked in the forge, in both films it is posed by Conan’s father. 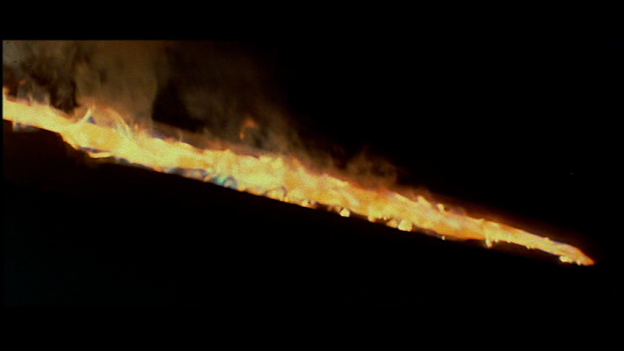 In 2011 the answer is given in the same scene “fire and ice” provides the strength of steel.  Meaning of course that as heated/quenched steel is best tempered, a spirit that consists of equal parts furious passion and level-headed temperance is indomitable.  A fine lesson for the young Conan, but one he has trouble mastering throughout the film.

In the 1982 film the answer is provided but never written down on a piece of paper, tied to a rock, and thrown at the audience’s collective forehead so the audience must interpret the answer, and not everyone’s is guaranteed to be the exactly same.

Conan’s original solution is to rely on the strength of steel.  He blunders from place to place, hacking and slashing, until he comes face-to-face with Doom, whose legion of followers catches him easily and Thulsa Doom provides him another answer: flesh is stronger.  Steel is fine, but with his horde of fervent acolytes succumbing to his false prophet-eering, some willing to turn on and murder their own parents, Doom can overcome steel.  Was that the answer then?  If so Conan and the world were doomed.  But that wasn’t the answer either.  During the last battle with Doom’s lieutenants Valeria keeps her promise, that not even death could stop her from fighting by his side, and aids Conan when he most needs it.  Then, renewed with strength, Conan rises to his feet, shatters his opponent’s sword, his father’s sword, and destroys the High Priest of Set, a man bigger, stronger, filled with faith in a false prophet, and with steel forged by the very man who provided Conan the riddle.  Then looking at the shattered sword, he crosses his weapons in his battle-pit salute and bows his head to the Valeria’s funerary altar.  This battle was for her, and she gave him the answer at last: steel is weak, flesh is weak, but the strength of true belief and true purpose can overcome greater steel, greater strength, and any false beliefs no matter how powerful in the brutal world of Hyboria.

Conan then takes his father’s broken sword and kills Thulsa Doom and burns his temple to ash; neither taking his place as a new demagogue nor slaughtering his followers.  It is at this point that James Earl Jones suggests Conan becomes a hero.  By destroying the cult of Set and Doom he does something “for the whole world” not just himself.  For the betterment of everyone, not just for his own revenge.  Meaning there is a progression of the character, from wrathful to heroic.  And doing it all not as a “chosen one” but just driven by his own will.  Not a god nor a giant.  Just a man.  Finding the answer to his riddle.

Where does this leave forging a narrative in modern filmmaking?  Without sounding as old-mannish as shouting “things were better when…” I would like to at least silently mouth it.  Mostly because this trend has exploded into all forms of media; popular books, movies, music, video games; a trend where the narrative is so simple and closed it leaves no room to grow and has been dropped to the lowest common denominator.  Plots now have to be obvious, spelled out, and blatant.  Scenes have to be short, colorful, and loud.  Characters have to be broad and exaggerated.  Nothing can be implied in a character’s personality or purpose; it must be shown in excruciating detail (lengthy sequences of flashbacks, voice-overs, and “childhood” scenes instead of effective montaging done in older films) or spoken in needless expositionary dialogue.  To quote the Robot Devil from Futurama, “Your lyrics lack subtlety! You can’t just have your characters announce how they feel! That makes me feel angry!”  So why do the various industries want to remove all nuance and just have their characters simply announce how they feel?  The answer is simple: it’s easier and they have very low opinions of us…

This is definitely not an indictment to say “all new movies bad, all older movies good” but there is something to the reduction in intricacy of a lot of newer media.  I for one would like to see less hand-holding and provide room to let the audience divine its own answers or at least take the narrative training wheels off.

I never again want to have a roadmap explaining all the stops during a tale of high adventure!

One thought on “Trends in Modern Storytelling in Film: Conan – Conclusion and The Riddle of Steel”