A dear friend said to me this week, “No one would keep you as a hostage.” We shared a good laugh and knew she was right. NO one would be able to keep me as a hostage. I’m a nightmare – moody, mouthy, and opinionated – and meanness comes very natural to me.

We discussed what I would do in a horror movie hostage situation. Think Saw, Hostile, Texas Chainsaw Massacre. These movies have a psychopath or group of them who take “innocent” people hostage and torture them until death. Have no fear, though – with these tips, you may survive or at least die sooner!

*we don’t guarantee it, though. 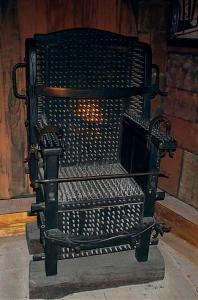 1. Demand they kill you. We’ve learned over the years in horror movies that begging for your life doesn’t work (thanks JB). Crying and pleading gets you no where. The killer already knows you are a human being and they want to take your life – thus the reason you are in the situation. They don’t care. Instead, force them to kill you. Show no fear in death, and you may actually survive.

2. Relate to them. No one ever survives because they tell the killer how great their life is or how much they have to live for. In fact, it probably makes your killer want to torture you more because they don’t have the same things. They want you to share the pain. Instead, talk about how much your life sucks. Dig deep, too. Look for things like your mother didn’t love you, sibling rivalry, broken hearts, the things that really scarred you. We all have them. It may be therapeutic for you, too.

3. Call them out. Killers enjoy watching you suffer, so don’t. If they cut off your finger, say you have seven more and give them the bird. If they make tiny incisions, ask if that’s the best they can do or to give you the knife, and you’ll do it. If they hit you, tell them your grandma hits harder. Get inside their head and make them doubt their ability. Either it’ll amplify their own insecurities or they’ll kill you faster – either is better than being tortured.

4. Get personal. You don’t know why they’re a psychopath, so test the waters. Ask questions such as: did your mommy not love you? Did your daddy beat you? Did your true love see you for the crazy psycho you are and bail? Or maybe he/she ran off with your brother, sister, best friend? Ask in the most mocking tone possible and find the reason. Use it against them. Be nasty.

5. Show emotion (but don’t cry). Be angry, degrading, and forceful. Yell and mock them. Mock them A LOT. Call them a drama queen, say things like awe…you poor thing, no one loves you (in your best baby speak). Or when I get out of this chair, I’ll show you how to torture someone. Feel it! Doing this will accomplish one of two things: defeating them or receiving your death wish.

Most of us don’t want to be tortured to death, so the best option is to avoid it. You may get away. If so, grab a manageable weapon and beat or hack them into oblivion. If not, going quickly is a better alternative to suffering for days, maybe even weeks. Keep in mind that you’ll never be the same, and if you do die, you can come back as a vengeful spirit and haunt them into eternity.