Demonic possession is an interesting concept. Especially when it’s an object being controlled by a demon or spirit. Is it possible for something to take over an inanimate object such as a doll or stuffed animal? Think Child’s Play.

This week’s story comes from a guest blogger, and I admit if this happened to me, the thing would have been burned.

As any first-year law student knows, time is the ever-present opponent that controls your quality of life, because a 20-minute nap can feel like salvation while hearing “five minutes remaining” can feel like the moments leading up to a gas chamber.

I was a first-year law student when the events of this story took place. I recently returned to my apartment for a second semester after enjoying a much needed Christmas holiday with family. One of the presents I received was a generic stuffed polar bear about the size of a golden retriever.

After returning to school, the workload gradually increased to the point where I hated everything about life except for the brief moments of reprieve from work. It was one of these moments that fostered my one and only experience with something seemingly unnatural.

I arrived at my apartment, trudged up the stairs, and deposited my bags by the kitchen sink. I ate a quick bowl of cereal and quickly skimmed the cases I had to read. That night’s workload was light, so I decided to take a nap first. In the apartment, my couch abutted a wall and faced the stairs about 15 feet away. Before falling asleep, I distinctly remember my polar bear sitting next to the stairwell facing the stairs.

After sleeping for about an hour, I awoke and immediately saw that I was staring into the flat, lifeless eyes of the polar bear, which was in the same spot but had inexplicably rotated about 100 to 120 degrees while I slept. I still have no explanation for this unusual event. I had no roommates and nobody else had access to the apartment. Both doors were still locked, and nobody else had a key except the property manager, but she never dropped in without advanced notice.

Being a rational person who prizes logic, I can only concoct three explanations. One, I misremembered the orientation of the polar bear after waking up (this is the most likely, but I am fairly certain the bear was facing the stairs). Two, I awoke during my nap and rotated the bear to face me while in a restful stupor (this seems unlikely because I have never been known to sleepwalk, nothing else was disturbed, and the bear was oriented precisely in my direction). Three, the polar bear somehow moved itself or was moved through some extraordinary force (this seems patently silly because I am a diehard skeptic).

Some people urged me to discard the bear to play it safe. After all, who wants a thing in their life that cannot be understood and therefore cannot be controlled? Being such a loyal skeptic, I opted to keep the polar bear. He remains in my closet to this day, after three years. In some ways, thebear has become my best friend, and we’ll be friends to the end. 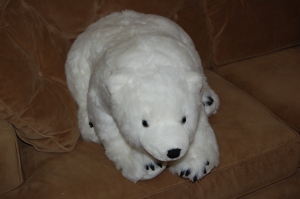 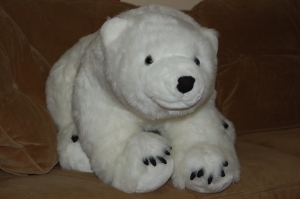 Want more? Be sure to read our other stories, and share your experiences in the comments sections!