He’s the Dark Vengeance Dark Angels Librarian and GW really showed off what they could do with plastic minis in that set.  So much so that I’ve heard that finecast has met its demise going forward.  I had a previous librarian, but since this guy was so utterly Dark-Angel’d up, yo, I moved my other one to my little Blood Angels army.

I didn’t follow the exact color scheme used in the Dark Vengeance literature, but it’s more fun to riff a bit right?  He, like my standard bearer, needs some serious touch-ups as I can spot all kinds of places I didn’t blend well, but I do like his force sword!  Other areas are just things I can look forward to correcting soon. 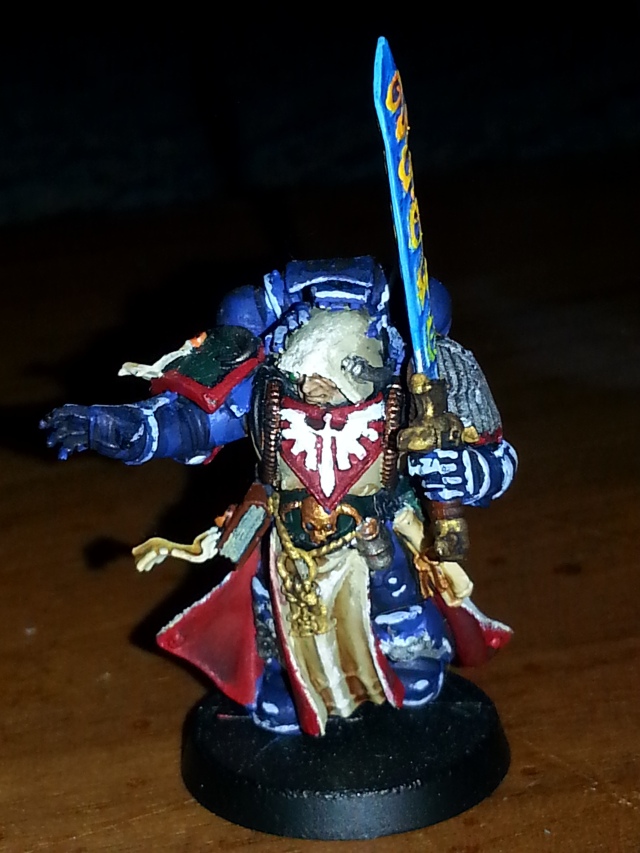 I actually had two of these guys, but the crew in the sadly closed Woodfield Mall GW store gave me a GREAT idea what to do with my other one.  He’s been primered and painting has only just started on him but this is what I did with my other Turmiel:

I altered the command bike to carry an extra Tome of the Long Hunt from the Ravenwing upgrade sprue on the wings of the angels on the rear fender.

I’ve included several other little additions, such as the second volume on the side of the fender, A scroll from Skaven plague monks on the front fender, and a cherub I got with an Empire General Standard bit.

I heard of a few ways to convert a regular Ravenwing sergeant into a librarian-on-a-bike (including using Grey Knights bits), but with Turmiel’s dynamic posing (love that outstretched hand) and iconography it was hard to think of another one that would look nearly as Dark Angels-y.

Once I have him completed I’ll post pics of him, hopefully showing, hopefully, more advancement in painting ability.

Check out my previous ork painting posts for more!

Stormboy Nob on Flying Base