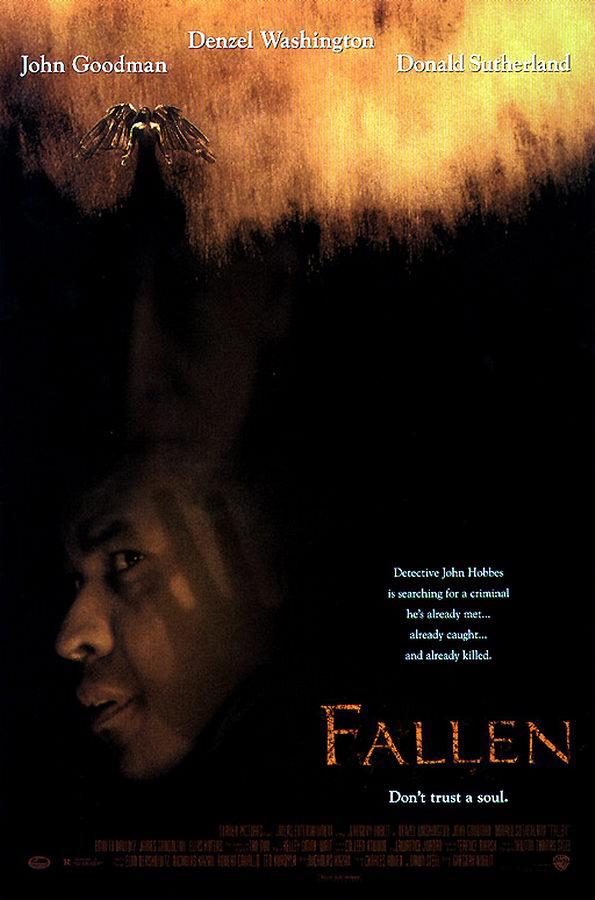 Starring Denzel Washington, John Goodman, Donald Sutherland, and with a terrific cameo by Elias Koteas, Fallen tells the tale of detective John Hobbes.  Its introduction follows one of Akira Kurosawa’s best pieces of advice.  Kurosawa once stated that all samurai movies start the same, a rider gallops up to a watchtower and shouts a greeting and a guard in the tower shouts back; a scene immediately followed by set up dialogue.  Kurosawa said to add dynamism, he wanted to start at the guard’s response.  Immediately immersing the audience in the world and story.  Fallen does this wonderfully.  As the film begins we see Hobbes (Washington) speaking with a serial killer he has caught, Edgar Reese (Koteas) on the day of his execution.  Reese makes statements, speaks unusual languages, and seems surprisingly cocky for a man about to meet his end.  All while terrific moody narration from Washington enhances the scene.

It all sounds like typical police procedural story telling until Reese is executed and we see in first person POV his spirit leave the dead body and take residence in a new one…setting up the true narrative, a demon, Azazel, that can possess bodies via touch, continuing his murderous ways.

As the narrative continues we follow Hobbes as elements from the Reese case begin to appear in new cases, and he pieces together than there is something going on beyond just a normal crime.

The film is absolutely filled with amazing performances and memorable scenes.  Washington and Goodman as terrific as always, truly selling their decades long partnership effortlessly.  Hobbes’ brother and nephew bring additional dimensions to the character and further explain without boring exposition why Azazel’s selected Hobbes as a target.

Azazel’s string of victims is also impressive, as each pick up the mannerisms exhibited by Koteas in the opening scene, always being believable as the same character inhabiting different bodies.  Not only is the character always the same, but each one of his victims sings or whistles The Rolling Stones’ “Time is on My Side,” a perfect song given ominous subtext by the crafty demon.

My favorite scene involves the character Gretta Milano (Embeth Davidtz) is being stalked by Azazel.  She flees through a crowd and Azazel chases her by touching successive members of the crowd each one closer and closer to her.  It’s a tense and extremely creative chase scene.

The ending also has a legitimate twist.  Not an M. Night Shayamalan twist, but a legitimate one that you is wonderfully executed (except for one piece of early narration that doesn’t quite fit).  I won’t spoil it here but it alone makes the film worth watching.

If you haven’t seen it, I highly recommend Fallen, especially during the Halloween season.  Watching it now you can see where subsequent films and TV shows took some of their ideas (Supernatual’s entire founding story is very similar to Fallen with the demon even sharing the same name)  It’s not your typical dumb slasher movie and at times runs a bit slow, but the care it took to craft its world and story is remarkable and it is by far one of the best supernatural thrillers I’ve seen.