This past Sunday I was hanging around the house by myself playing some games, working on some writing, and I wanted to find something fun, light-hearted, and entertaining to watch or listen to. Scrolling through my Netflix list I came across one of my favorite comedies, one of the movies that can make me laugh out loud over and over, even if I watch it five times in a row… The Birdcage. 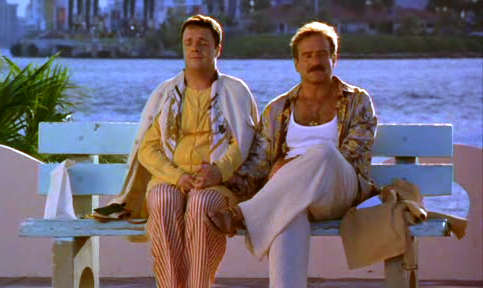 Though it really is an ensemble cast, the heart and soul of the whole film is the one and only Robin Williams. Seeing him at his best, so lively, as the owner of a high-class drag club on Sunday made the news of his passing on Monday even more shocking than it would have been…and it would have been anyway.

His performance as Armand Goldman in The Birdcage is his entire career summed up to me. At once he was completely hilarious, pithy, witty, sarcastic, and goofy; yet he also possessed the subtle gentleness of a father, and portrayed a gay nightclub owner with style and grace rather than completely over the top and flamboyant, though he could swing that when the scene or situation called for it.   That to me is Robin Williams. We’ve seen him be all of those things and more on screen, and he’s one person who, in interviews, always seemed to be four or five steps ahead and doing circles around his interviewer in a way not seen since the likes of Groucho Marx.

When I heard the news on Monday I was transported to two places in my memory: the first was the early Nineties. I used to love standup comedy and watched loads of them on HBO or Comedy Central. I saw Gallagher, Penn and Teller, Sinbad, and Bill Cosby: Himself (still one of my favorites). It was during this period I saw Robin Williams: Off the Wall, a rousing, fast-paced, comedy barrage by one of its masters. Despite his many and varied roles; comedy, drama, or even suspense, he was always that person to me. A young soul just waiting for emotion, whatever emotion was surging through him at the moment, to pour out in effortless waves.

The second memory was when I actually saw him in person once, if only for a moment while manning a booth at a book festival in Nashville. It was a weekend he was performing a concert during a stand-up tour and, wearing dark sunglasses and a casual street clothes, he walked by slowly, just taking in the event. It was early in the evening and the festival was clearing out with very few people still there. But he was there. And that moment sticks with me. He wasn’t there seeking attention or, alternatively, trying to hide from the public. He was just there. As a patron. He waved as a few people noticed him, a small subtle move, and gave us a small smile as he went by.  We all just kind of looked at each other in stunned silence until a fellow booth-worker said, “wait…was that Robin Williams?” It was indeed, and I’m reminded of it now.  He passed by us far too quickly but in that instant gave us all a thrill.  And a smile.