After an unusual costume drought during high school and college, I received the opportunity to re-visit one of my favorite childhood pastimes at work.

One year, my previous office put together a social committee that designed a bunch of activities for us all to participate in every year.  I never participated in any but one, the Halloween costume contest.

It was during this contest that I put to use all that I learned from watching my mom tailor-fit costumes to me and started doing this for myself.

This was fun because it created an entirely unique costume, and I prided myself on never buying costume parts; just weird odds and ends (many of which I strangely already owned) stuck together.  I pride myself on winning the contest (essentially, I was robbed the first year, I got “Most Realistic” that year, the costume that won was rented from a costume shop…that’s almost cheating in my opinion 😉  ) every year, even though once it was unofficial (they did a freakin’ chili cook-off instead, though some of us still dressed up) and was in a group one year. 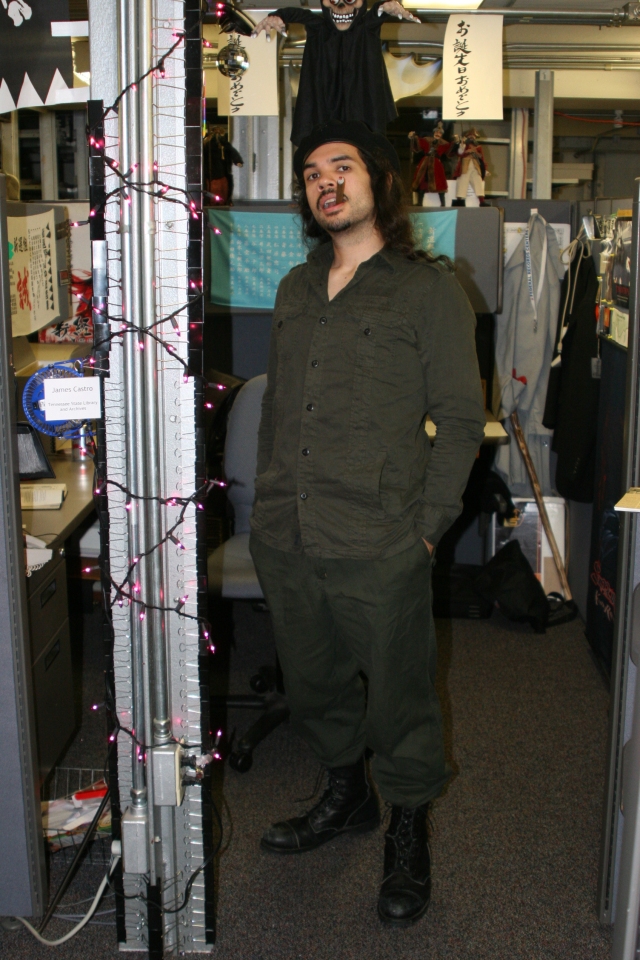 2009. Che Guevara.  This was a no-frills costume for me.  I needed the green shirt and the beret.  It’s the only time I used a “costume” piece.  That cigar is fake.

2011. Pulp Fiction.  My friend Ron (Jules in this photo) and my RevPub counterpart Raven talked me in to this one.  Ron came as Jules and I was Vincent Vega from Pulp Fiction.  The only detail touch I did was to print the cover to Modesty Blaise and tape it to another book.  Another very good friend came as Mia Wallace.  The three of us won for best costume that year.  I really feel it IS one costume.  Ron was the star of this one, I ‘m more of a costume accessory.  Without Ron I’m just a dude in a suit! 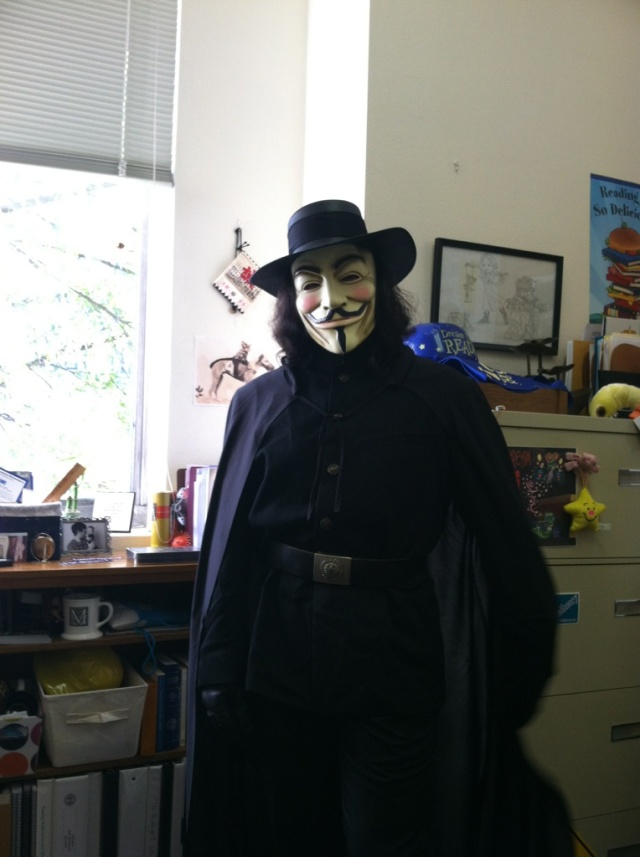 2012. V for Vendetta.  This was my last costume at my previous job.  I don’t think there was a contest that year.  By this point, I’d already turned in my notice and was prepping for my new job.  This costume was one I always wanted to do (love this character), and I had the mask for years before I used it.  I recycled a lot of the Vlad costume for a lot of it.  It was fitting as not only was it a cool costume, but a good political statement for me to make about my feelings on my place of employment right before I said adieu…

The content contained on this website, including but not limited to all writings and drawings, are the original creations of their indicated authors. Those authors retain all rights to their creations permitted by law. The content contained on this website and webpages may not be republished, rewritten, reproduced, or appropriated in any other way without the express written permission of the work’s indicated author. We don't mind sharing, but please credit the writer. Stealing and plagiarism are not cool.
Loading Comments...
Comment
×
<span>%d</span> bloggers like this: