Though I was a video gamer from a young age, playing Atari and NES, I didn’t get into PC gaming until I was in middle school.

My first home PC was a simple IBM with no hard drive.  I played games directly off a 3.5” diskette and could only play shareware versions of Where in the World is Carmen Sandiego? and use Print Shop Pro to print on the DOT Matrix Printer.  As time went on it became difficult to find games I could play that only had one disk…luckily we eventually upgraded our PC to one with a moderate hard drive (I think around 120 mb or so) and a whole new world of gaming opened up.

This was when I was introduced to shareware versions of Wolfenstein 3D, Blake Stone, and eventually Doom.

These represent the first person shooters I ever played, and some of the earliest entries into the genre.  My friend Mike provided me with Wolfenstein and eventually Blake Stone.  We played both shooting games on the 8th grade newspaper computer instead of actually working on the school newspaper (I don’t know if we even had one) until we got caught.

Blake Stone is almost forgotten now, but it was a sci-fi game of the same making.  I remember the blue-green gun and the mad scientist and green alien bad guys.  Blake Stone was another one Mike and I played in English class (right behind the teacher if I recall…) and, though I never played it at home, it really got me into the corridor shooter game. 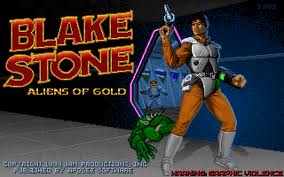 When Doom came out it changed the dynamic for me.  Released from the corridors, you now moved through expansive locales and multiple-story levels.  I played it on shareware, only the first few levels and I played them over and over.  It’s the first “god mode” I ever used (IDDQD!) and even more often I’d use IDKFA for all weapons.

I played Doom relentlessly.  I was one of the few individuals who bought a Sega 32X and even though it didn’t have a lot of games I truly enjoyed the ones it had.  I listened to Use Your Illusion I & II and played Doom for months on my 32X as a middle schooler.

Once my PC could handle it I finally got a copy of Ultimate Doom and Doom II at the local Media Play and swapped the dozens of disks to install them.  It was this era when you could play a game for months…even years.  Turn on some midi music and play Doom for hours just as a time waster.  I can’t even remember how many homework assignments I blew off to kill the Cyberdemon yet again…

I actually remember it being a controversy at the time: did Doom make kids violent?  It was ludicrous to me.  Doom was as realistic as a cartoon (though a tad gorier than most I’ll admit) and it would follow that kids would only learn how to kill cacodemons with a keyboard while wielding a pixelated plasma rifle…  How that equates to loading a pistol I’ll never understand.  I’d say unless you’re a spiked imp throwing fireballs on screen and I’m a crew cut face wielding a video-chain gun society should be safe.

Doom really stands as the last first person shooter I really loved.  Others came along (Duke Nukem 3D shortly after the Doom era…Kingpin when I was in college) but none really captured that Wolfenstein–Doom feeling for me.  Now it’s one of my least favorite genres, burdened with a heavy emphasis on multiplayer (I’ve said it a million times…I deal with idiots all day in my real life…I don’t need to deal with anonymous idiots during my leisure time…) and less on long campaigns I could put on some music and kick back to they haven’t appealed to me.

So here’s to the 90s first person shooter.  Turn on the game, turn off your brain, and enjoy some mindless (but entirely harmless) violence!