In my last post I mentioned Cosplaying at the con.  Cosplaying is a huge part of just about every kind of convention now and one of the best aspects of going to a con is seeing the effort and work participants put into their costumes and the terrific creativity on display.

Everyone is appreciated no matter the skill and everyone is there to enjoy and not judge.  it a great atmosphere, especially for new cosplayers. This was my first year in costume to a con like this and I found it to be an amazing experience.  I was stopped for pictures with con-goers and other cosplayers.  Mad Max and Nux stopped me to ask me how I made some of the material.  I got fist bumps from random strangers out of appreciation.  And most of my costume was done on the cheap!

Here are some of my favorites from the Con: 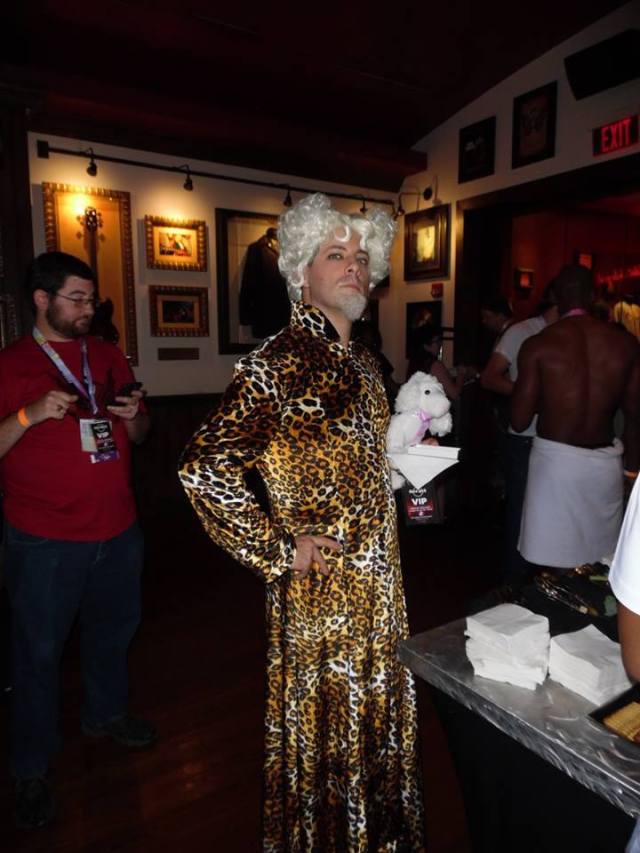 Cosplaying is so much fun and so empowering I highly recommend it.  Even if you’re an obsessive introvert like me who obsesses about accuracy and details, you’ll be surprised how many people just love that you’re there in costume.  No one sees the missing details, trust me!  It’s all about fun and for me it was the most enjoyable part of the con.

I’ve only ever attended smaller conventions.  While there are still crowds, panels, and interesting sights attending a large convention is a completely different experience.  So how about one that attracts half a million people to Atlanta in September?  This was my first year at DragonCon and it was a terrific experience.  I thought I’d share some general thoughts on the Con and then get into detailed thoughts in future posts.

I loved the Con and I’m actually eager for next year.  Next post will focus specifically on the cosplay experience!

Halloween more than any other holiday is a “pot luck” holiday to me.

This year rather than just do something store bought I thought I’d go all out and MAKE something.  While I’m actually a pretty good cook, I’m a lousy baker, but I put that aside and decided to try my hand at making some cookies.  I found some really clever Thriller style dancin’ zombie cookie cutters and thought I’d make a nice Halloween zombie horde.

Knowing my limitations I decided against making dough from scratch and bought some tubes of sugar cookie dough.  I rolled it out and following the instructions got it to a certain thickness before applying the cutters.  As soon as I removed the cutter, however, the cookie fell to pieces.  I determined the dough to be too thin and re-rolled it a bit thicker.  I applied the cutter again, and upon removing it only the head and arms and legs stuck this time, leaving just a zombie torso.  .  While dismembered would be in-theme, it seemed like too much of a mess up again and I decided to scrap those too.

At this point the dough started to get sticky so I re-floured it and put it in the fridge.  After letting it chill I re-rolled it thicker and tried the cutters again.  This time when I took the cookie cutter off the arms and legs stretched WAY out making an octopus-armed zombie.  At this point I started to get angry.  Like REALLY angry.

I re-rolled the whole batch SUPER thick and used the cutters finally having cookies survive the process: 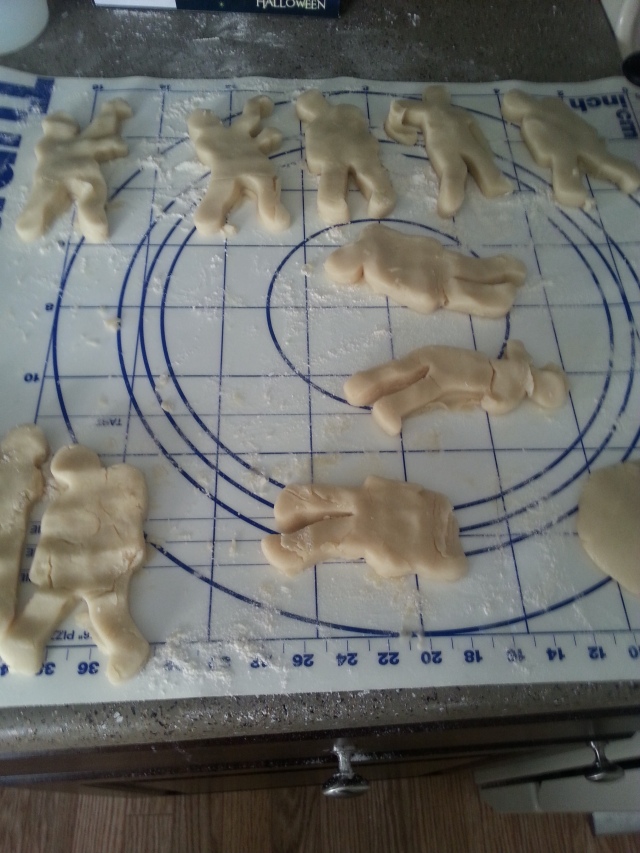 I didn’t have a cookie sheet so I put six of them on a pizza pan, put them in the oven to cook, and continued to cut the rest of the dough, making 30-40 dancin’ zombies.

When the timer went off and opened the oven and found the six zombie cookies I was baking had merged into one GIANT cookie on the pan.  Apparently cutting them thick enough to survive the cutters meant they were so thick they swelled and spread out while cooking! 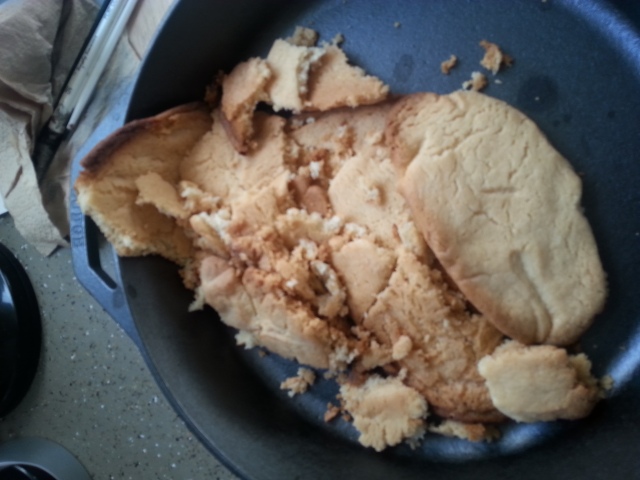 They shattered into a mess when I took them off the pan and I tried to make only twoto see if they’d just swell without merging into a zombie-cookie-blob form.  It made this:

Finally furious beyond imagining I yelled “F*CK THIS!” wadded the rest up into a bowl and bought some friggin cookies at the store on the way in the next morning.

Though admittedly the pics of my baking failure and the story was a bigger hit at the pot luck than any dessert I could’ve made.