Since Gareth Edward’s Godzilla is turning a bigger profit than the Nevada pleasure industry I thought it would be fun to share with some of the newer Big G fans some of my personal favorite, lesser known, Japanese Daikaiju films and series. I’m sticking with the Japanese film industry for these so there won’t be any Pacific Rims or Cloverfields on this list. And while fans may say “that’s not a lesser known film” these are just the films that, in my experience, Kaiju neophytes don’t seem to know about. In addition I’ve tried to include a broad spectrum of giant monster movies. Those for die hard monster fans, horror fans, comedy fans, even kids’ movies.

1.)    Godzilla Heisei Series: This series started with the epically hard to find (in the states at least) Godzilla 1985 or Godzilla Returns. Then followed a terrific series of movies with some of the most creative monsters Godzilla ever had to fight and some of the best sci-fi stories in giant monster movie history. These movies follow a broad continuity where the people don’t always track from one film to the next but the general concepts do. Godzilla is halfway between good guy and bad guy in this series. He looks badass and the series has a very satisfying arch. For those unfamiliar with Godzilla or trying to escape the goofy king of the monsters from the 60s and 70s, this is a great series to start with.

2.)    Gamera Heisei Series: I know a lot of people grew up with Gamera on MST3k and became familiar with the giant, flying, rocket-powered turtle from his older, kid friendly movies, but this series changed it up. In the 60s and 70s Toho’s Godzilla took a page from Daiei’s Gamera and became more family friendly. In the 90s Gamera took a page from Godzilla and became a ferocious, kick ass monster. He’s still generally a hero, though there is complexity added by showing the problems created when giant monsters are stomping around fighting, even if they’re doing it for “good” reasons. Furthermore the second film Advent of Legion actually contains some very good horror elements. Gamera finally gets his due as a seriously good monster and made some of the BEST (no joke) Daikaiju movies out there. It’s only a trilogy and well-worth the time.

Gamera: Guardian of the Universe

3.)    Big Man Japan: This is a stand-alone comedy/mockumentary following the life of a Japanese man who inherited the ability to grow to giant size to fight giant monsters who invade Japan. Directed by Hitoshi Matsumoto, who plays the titular “big man” it is an often hilarious look at the life of a guy whose job this is, rather than the more fantastical tales normally told. We see his lousy apartment, his broken family, his inability to live up to his ancestors, and how difficult it is to be publicly mediocre. It is very funny and marred only by a surreal (but typically Japanese) ending featuring some good, old fashioned, Ultraman style fun. It takes some getting used to but is a serious blast if you don’t take things too seriously.

4.)    Rebirth of Mothra Series: I have no shame in saying I LOVE Mothra. In fact I may like Mothra more than I like Godzilla. I’m not sure if it’s her feminine wiles, her fuzzy lil face, or her endearing squeak (maybe it’s the hot little faeries that accompany her everywhere) but I’ve always loved Mothra… She escaped the Godzilla machine with her own films in the 90s the “Rebirth” series, which featured both Mothra and a “new” Mothra often identified as a “male” version. I have to stress these are KIDS movies. VERY much so. They are kind of like Willow meets Godzilla and have all the elements that keep kids watching, including bright action, kid heroes, and a generally happy mood. These movies are great fun, again if you don’t take them seriously and can just turn your brain off and view them as a kid. Great starter films for a younger generation of monster fans and a great series for Mothra fans in general. The first two are available on a two set DVD. The third one has NEVER been released in the states! C’mon Toho. Help a fan out here!

5.)    Godzilla Millennium Series: These are my personal favorite Godzilla films. In these Godzilla looks as just about as cool as he ever has, there is a TON of monster mashing, loads of new opponents or a very good use of the monsters from the Toho canon, and some of the best human plots ever in giant monster movies. Godzilla stays somewhat “bad guy” here, and the humans fight to defeat him using all the best tricks from previous series, mazer cannons, mecha-monsters, other monsters. It has all the great plot elements too, invading aliens, guardian monsters, etc. The first movie is a terrific intro to Godzilla for someone who’s never seen a Big G movie. The third movie in the series takes a very different approach but is one of the best out there. The final movie in the series may be my favorite Godzilla movie ever. In it Godzilla is indestructible, EVERY Toho monster ever (and even the 1998 US “Zilla”) shows up, and it is just straight crazy action from start to finish. All of the monster suits look great. These movies are filmed well and you actually LIKE and care for the human characters. Just a great series.

Those are my personal picks for giant monster fun. Of course there are MANY others but if you just saw 2014’s Godzilla and want a modern taste of great these movies can be sans CGI be check them out! 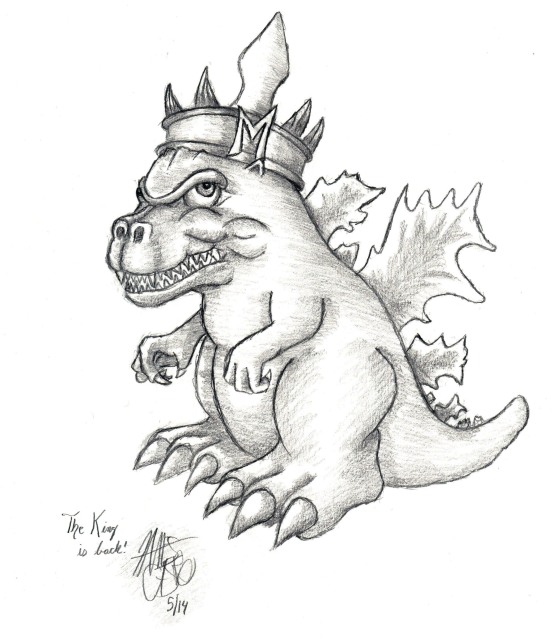 Updates to the Franchise:

Is it a perfect movie? No. The people sequences do go on and I would’ve traded about 15 minutes of human drama for 15 minutes of monster combat, but that is a tricky balance. Monsters fighting too much can become silly and cartoony, people talking too much becomes boring. This film did a pretty good job with the balance. This was Monster Movies Level 1010: Introduction to Godzilla. It did everything that made the Toho Godzilla movies great, and added some new film features, while always treating their source material with reverence and respect.  The only real complaint I had was the lack of the Toho Godzilla theme, which isn’t always a constant but it would’ve been nice to have the Big Guy arrive to the recognizable strains of earlier times.  Godzilla has changed, probably forever. Barring an unlikely Toho-produced Suitmation movie, Gareth Edwards’ film represents the future of the Godzilla, and though I’d welcome a return to Suit-zilla, if this has to be the future the future is bright. All other sci-fi/monster movies should really sit up to take notice and notes. To paraphrase Nas, the king is back; time to return the crown.

For those who don’t know it, this is the classic Godzilla theme.  He burst from the water and trudged toward some doomed city for 50+ years, often accompanied by this music.

The content contained on this website, including but not limited to all writings and drawings, are the original creations of their indicated authors. Those authors retain all rights to their creations permitted by law. The content contained on this website and webpages may not be republished, rewritten, reproduced, or appropriated in any other way without the express written permission of the work’s indicated author. We don't mind sharing, but please credit the writer. Stealing and plagiarism are not cool.
Loading Comments...
Comment
×