I’ve been lucky enough to attend some pretty impressive concerts.

I got to see U2 live in a relatively small stadium, Journey from just a few feet away, and Ozzy’s last Ozzfest with the Black Sabbath lineup.  I even got to see Axl with his new Guns N’ Roses line up back in 2012, having previously seen Duff McKagan, Slash, and Matt Sorum (the Use Your Illusion line up) with Velvet Revolver at the aforementioned Ozzfest.

At the time I thought seeing the various parts of GnR in their new ventures was as close as I would get to seeing the original line up live; especially considering the legendary bad blood between Axl and his former bandmates.

Then the news broke last year that Slash was quoted making some exceptionally flattering comments about Rose.  And Axl was then quoted reciprocating with some equally complimentary statements about Slash.  The two cornerstones of the band thawing a bit?  Rumors flew quickly, would there be a reunion?

A few months later it was announced that Rose, McKagan, and Slash all signed up for a reunion show at Coachella.  Since I knew I wouldn’t hit the lottery any time soon I figured it’d be something I’d have to miss…until they announced tour dates featuring Axl, McKagan, and Slash.  And that they would be playing the football stadium in my city!

I’ve been a GnR fan since the late 80s and early 90s.  I grew up watching their videos on MTV (back when they played music) and became borderline obsessed with the group after the Use Your Illusion albums.  Even though tastes and moods can change any time anyone asks “who’s your favorite band?”  Guns n Roses was always the answer.

For me the show had a lot to live up to and it came through beyond what I could have imagined.  My best friend Mike (who’s been a fan almost as long as I have) called it “the culmination of his being.”  Over three hours of classic and newer GnR material.  Arrangements that harkened back to the Use Your Illusion tour (I remember seeing Slash play the Godfather Theme on a VHS tape I had of a GnR show from the 90s) and even some surprises; such as two songs featuring the first member to be ousted, Appetite for Destruction drummer Steven Adler.

What made the show remarkable to me was that it wasn’t just a greatest hits tour.  Yes they played the biggest of the biggest hits and the roar of the crowd was the loudest I’ve ever heard when the opening strains to “Welcome to the Jungle” echoed off the stadium stands, but it was more than that.  “Jungle” was followed with relatively deep cut “Double Talkin’ Jive” which has one of my favorite drum beats and guitar outros ever.    That in turn was followed by the 9 minute epic, “Estranged” which possibly features my favorite guitar solo ever.  Halfway through the show they broke out the ultimate GnR deep cut by playing Coma.  A 10 minute song I never thought I’d experience live.  Casual fans all around me sat down as the song wound its way through its narrative leaving me one of the few in my section standing up and singing along.

The whole show transported me back in time where playing Doom and drawing comics was all I did every day.

It was far and away greatest concert I’ve ever attended.  What’s the future of GnR?  Who knows.  Axl being as unpredictable as he is may decide to drop the act and just tour with AC/DC (which I have to say if they came here with that line up I’d be pretty psyched for that too).  McKagen may ditch it for a solo act.  Slash might do the same.  The camaraderie on stage appeared pretty damn good though, with Axl jamming to Slash’s solos, and Duff getting to do his own Misfits cover.  And I can’t think of a show where bandmates could play for 3 plus hours for as many shows as they have if they weren’t enjoying themselves.

I shouldn’t hold out hope for a new album featuring the OG GnR line up…but I am.  Maybe someday we’ll hear new material, even just a song or two, from 80s metal’s Lennon & McCarthy of Axl and Slash.

But if it never happens, or even if the band happens to implode yet again in the coming weeks, those of us who grew up in the GnR era will always have the masterpieces they produced from 1987-1992.  And I’ll never forget the show they all got together to put on in 2016. 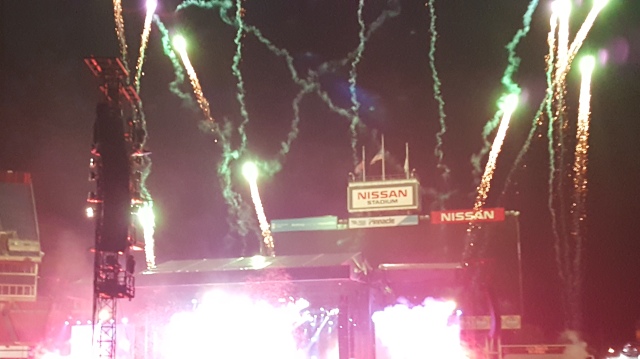 Lindsey Stirling played Fontanel this week (aka Carl Black Chevy Woods Amphitheater), and this was no regular show – it fell on a milestone birthday of someone I love very much.

This was the third time I’ve seen Lindsey. This year’s show seemed to focus more on her and what she wanted to do to improve her own performance and the show itself. Here’s what was different: 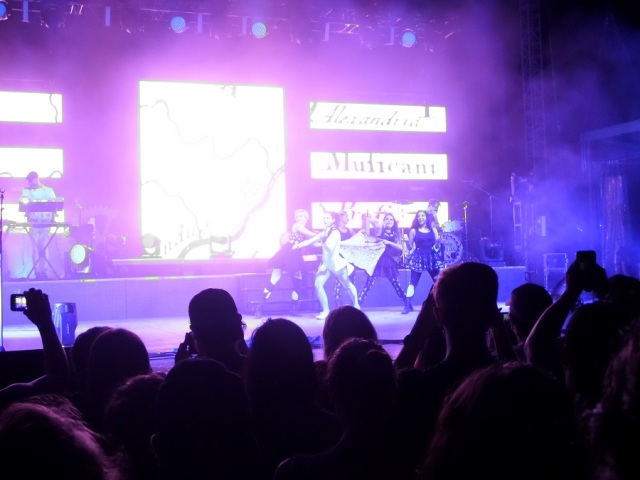 Woman Power – Lindsey replaced her male backup dancers with women. On stage, she admitted to being the only girl on the tour for the last 2.5 years. Wow… I went on vacation with three male family members last year and thought I was going to lose my mind a few times. The new dancers were fun and talented. They didn’t do anything mind-blowing, but they added a playful, strong girl-power element to the show.

Fewer breaks – We were 10 feet from the stage, so I could see her catch her breath and get tired, which was cool. There were still several stage and costume changes, but they took much fewer breaks between songs than the last time, and the pace moved well. 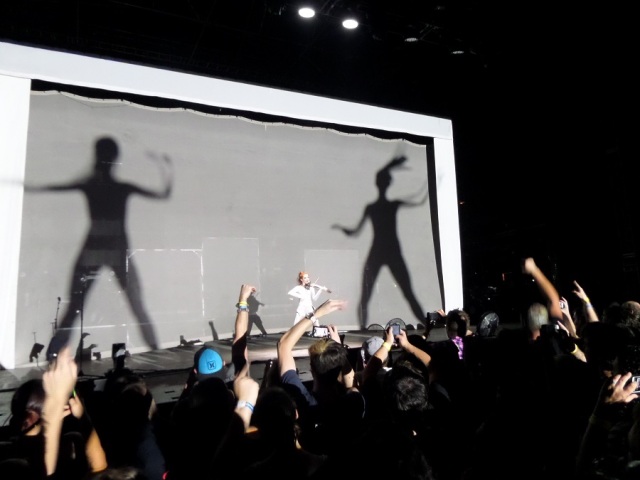 The spotlight – I didn’t realize until the next day, Lindsey was in the spotlight more. Her band members stayed hidden half the time, and the show was about her performing for the audience. The crowd has also grown, as Fontanel holds 4,500 people and was nearly sold out. I believe she has truly come out of her shell and will continue to get bigger and bigger.

The songs – The set was awesome. She had a better balance with her songs and the variety of others she covers. For example, gamers love her for covering songs from Zelda, Skyrim, Assassin’s Creed, etc. She always plays one and thanks the gamers for supporting her from the beginning – they are the reason the became so huge on YouTube (nearly 50M views for Skyrim alone). However this year, she played a compilation and blended the most popular ones together, and it rocked.

The Encore – I was so tickled when we were walking to the car after the show, and my young companion said, “That last song she played was like a bunch of different songs!” I smiled and replied, “That was Phantom of the Opera.” That’s right, she ended the night with the epic song, which I’ve never seen her perform. It was incredible. 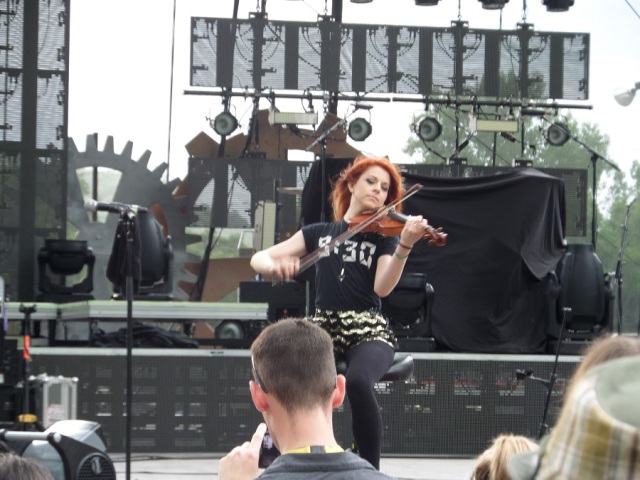 Bonus – We met her. Because it was a special night, I bought VIP packages. We saw her playing cornhole, met and hugged her, took photos, did the Q&A, watched the sound check, and had a blast. I was able to thank her for being such a great role model. The milestone birthday will never be forgotten. It was 96 degrees outside, the venue was evacuated twice due to lightning, and afterwards I drove through the worst storm I have ever been in. It was an adventure and well worth it!
Be sure to check her out if you haven’t, and feel free to share some love in the comments below!

If someone had told me in January I’d be writing about seeing my favorite 90s bands, I would have laughed in their face. Even by March, the 2013 lineup for Nashville concerts looked bleak.

It wasn’t long after that when tickets for the first show went on sale. Then the next and the next. What I thought would be a wasted year turned out to be my 90s teenage dream come true.

July 9: Marilyn Manson – This show was especially important because he played Nashville when I was in high school and I wasn’t allowed to go. Manson was in his prime, and of course, his reputation proceeded him. As a teenage, I always felt like I’d missed something pretty awesome.

In July, I fulfilled my wish and took two of my favorite people with me. We had a great time. Manson sounded great, rocked War Memorial, and there was not a bad seat in the house. He performed all our favorites and changed outfits and props nearly every song. My favorite part was talking to all the other 30-somethings who were seeing him for the first time because like me, their parents wouldn’t them see me. We stood united.

October 22: Nine Inch Nails – Anyone my age knows how big NIN was in the 90s. Trent Reznor was the man. I was again too young to see him, and later I missed NIN a few times due to biology labs and adult responsibilities. For 15 years I’ve listened to people tell me how awesome the show is, so this was a must-see. If you’re thinking about it, just go. He sounded amazing, and it was one of the best light shows I’ve ever experienced. You couldn’t take your eyes off the stage, and he performed Wish and March of the Pigs. You haven’t really heard these songs until you’ve heard them live.

November 24: Rob Zombie and Korn – Two headliners. And those two headliners. What can I even say? I’m surprised the roof didn’t cave in – everyone was on their feet the whole time. Zombie got the crowd rowdy and loud (as James says he’s a performer, a ring leader, a presence). As if Zombie and John 5 weren’t enough, he brought out a special guest: Mick Mars from Motley Crue. It was epic.

Then Korn set up. I won’t lie, I was a little winded, but you have to suck it up. This was the fourth time I’ve seen Korn, but this time was different. The crowd was LOUD. The arena shook with people jumping, screaming, singing. I looked around for a moment and thought, “This is what a concert should be. THIS is energy.”

We hope 2014 won’t disappoint because 2013 will be tough to beat. Here’s to ears ringing, lost voices, and rocking out.

If you had any fun shows this year, feel free to tell us about them in the comments!