“It can hardly be a coincidence that no language on Earth has ever produced the phrase, ‘as pretty as an airport.’ Airports are ugly. Some are very ugly. Some attain a degree of ugliness that can only be the result of a special effort.”

– Douglas Adams, The Long Dark Tea-time of the Soul

When Raven asked me to guest write for Rev Pub, her only guidelines were to have fun and write about something I know. Luckily for this site and the readers, I don’t know much. However, one subject that dominated the early part of my adult life was travel – specifically business travel – and although I hate to brag, I became something of an expert.

Over the course of roughly seven years, I flew every week, generally leaving Nashville early Monday morning and returning either Thursday night or Friday afternoon from places like Dallas, Sacramento, Kansas City and Philadelphia. During that stretch, I put my flight total at about 800, almost exclusively flying Southwest Airlines.

As most business travelers will tell you, the lifestyle quickly becomes a study of routine. Everything from the way I packed my roller suitcase to the strategy of picking the security line of least resistance (avoid the line with the most gray hair) quickly became second nature. By the end of my first year on the job, I was going through these motions almost on auto-pilot, which left an abundance of time to observe my fellow man.

There is no other place in our society where people act the way they do in airports. Airports are a sort of moral vacuum – places where courtesy and cleanliness flee like vampires from sunlight, places where it’s acceptable to do the things you do when you’re alone, even though you’re in the middle of hundreds.

Here is one of the more colorful characters I met during my travels; I hope you enjoy him as much as I did.

One truth of airport life is there are not enough seats for everyone. This is especially noticeable in dining areas, but even at the gates, you’ll find men in expensive suits sitting on the floor pounding away on laptops or sipping seven dollar coffees. People guard their gate seats like they are in line for concert tickets as boarding time approaches.

On a Friday evening in Charlotte, I found myself at one such crowded gate. At this point in my travel career, I accumulated enough status to be one of the early boarders, one of the noble few, and as befitting my rank, I waited on the edge of the boarding area. Now, generally speaking, the area around the boarding agent’s counter is kept clear out of respect for those needing to make flight changes and for the disembarking passengers – it’s a sort of halo of no-traffic.

At this particular moment, the halo is empty. My fellow travelers and I are arced around the agent’s counter at the prescribed distance like we are about to hear his great sermon. But lo! Who approaches? A forty-ish man with two bags and a large Styrofoam container weaves his way through the crowd, and seeing no other place to eat his meal, settles on the countertop of the boarding agent’s desk. He sloughs off his bags and proceeds to shovel forkfuls of barbecue into his mouth (because who doesn’t like barbecue?), not two feet from the agent’s face. 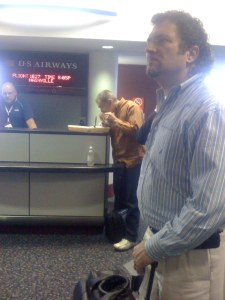 Now, by some sort of divine timing, the passengers from the just-landed plane begin to make their way down the tunnel and out of the door that Hungry Man and his bags have so masterfully blocked. He continues to eat, oblivious of those who struggle to avoid him and his luggage.

Finally, the agent notices and politely asks the man to relocate his feast. Without looking up, the eater gives the agent a casual left-handed bird and stuffs a biscuit into his mouth (remember boys and girls, we’re at the airport, it’s an asshole’s playground). Just then a young woman talking on her cellphone trips over his bags and goes sprawling into a businessman who then drops his fountain drink onto her back.

His meal finished, the Hungry Man picks up his bags and casually walks away, leaving his food container and drink on the counter, never once acknowledging the accident he caused. And you know what? It wasn’t even his gate.

The next time you fly I urge you to look up from your iPad and take note of your fellow humans. You’re bound to see something shocking and gross and amazing.

Feel free to share your experiences in the comments section!