I’ve only ever attended smaller conventions.  While there are still crowds, panels, and interesting sights attending a large convention is a completely different experience.  So how about one that attracts half a million people to Atlanta in September?  This was my first year at DragonCon and it was a terrific experience.  I thought I’d share some general thoughts on the Con and then get into detailed thoughts in future posts.

I loved the Con and I’m actually eager for next year.  Next post will focus specifically on the cosplay experience!

With DragonCon this week I thought I’d share an update of my Dredd costume.  I didn’t have the money to make it as 100% as I’d hoped but with the stuff I already had plus some creativity I think it turned out pretty well!

The helmet was the most difficult part.  Fiberglass is brittle and nasty to cut but by adding a $5 motorcycle helmet visor (which was very difficult to cut to fit, who would have thought chopping up DOT legal vehicle equipment would be so hard!?) and the padding (made from PC component packing) it ended up being pretty sturdy!

The kneepads I got for less than $10 from a store closing.  They work well enough.  Next time I’ll add the Megacity-style ridges to them to make them more legit.  Those are East German Army Boots I’ve had since high school.  I’ve got around four pairs so I wouldn’t mind trying to modify some of those for a more 2000AD style Judge Dredd for future costumes!

It was a lot of fun to put together and while, yes I’ll roast in the September Atlanta sun, I’m looking forward to being at least one Megacity Judge at the con this year!

Skarsnik is one of my favorite Warhammer characters.  The so-called warlord of the Eight Peaks (I’m a Queek Headtaker fan so I dispute that) has a great personality, a weirdo backstory, and some creative tabletop rules that include his wonderful partner-in-crime Gobbla.

I got my model (as I’ve gotten many of my favs, see Taurox the Brass Bull) off of eBay damaged.  I actually like damaged models.  You get them cheap and  give you tons of chances for creativity.  You can use your own parts to replace missing ones and even completely change a model entirely.  It’s ton’s of fun and economical.

I had to add my own spikes to Skarsnik’s back and replace his sickle-sword but that was just part of the fun.  I give you my Skarsnik: 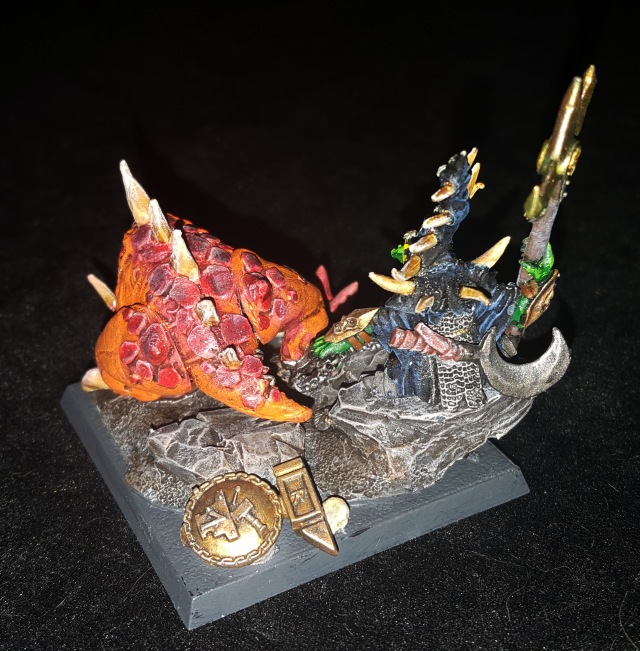 So here’s a fact: I like squigs.  I don’t know why but I can’t get enough squig units or squig related models.

After finishing my wyvern and liking the way his squiggy shield turned out I moved on to paint my Night Goblin Bigboss on a Great Cave Squig.

First off I love this model.  The posture of the gobbo looks like he’s barely holding on to his bounding mount and the squig is wonderfully expressive and full of personality.

I went classic on all the colors. The night goblin boss is wearing traditional black robed with a bit of blue edging.

I was pretty happy with the helmet too, as it’s clear it was looted from dwarfs. 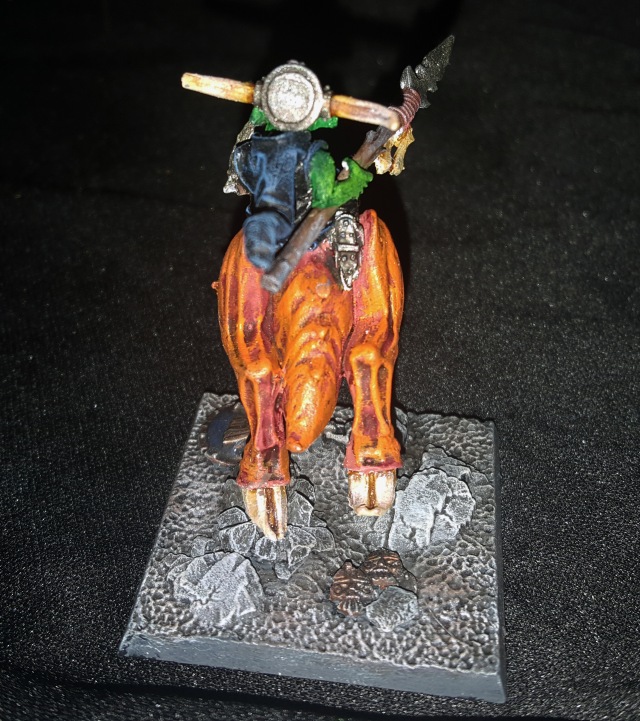 But the squig is where it’s at in this model.

His massive teeth are incredibly fun to paint and I haven’t had a chance to paint real bone so clearly in previous models.

I was running low on 40mm bases so I repurposed one from a troll.  It worked pretty well as the pre-textured based made for nice cave environment.

Next week, the biggest Night Goblin boss with the greatest squig of them all (may he rest in peace…)

Though I don’t have anything specific against Age of Sigmar I still prefer the regimental blocks and high-concept rules of Warhammer Fantasy Battles.  Something about huge blocks of troops and monsters crashing into each other and fighting in more linear combat than the modern, tactical squad-based war of 40k.

Having recently played Warhammer: Total War (which is a perfect marriage of concepts as far as I’m concerned) I returned to painting my poor fantasy armies.

I started the game with the Orc faction and decided to start with my orc army.

I picked up this metal Orc Warboss on a Wyvern at a friendly local game shop.  The model seemed a little wonky but I liked the look of it and knew these weren’t exactly for sale everywhere any more.  I’m glad I did.

I used all basing and dry-brushing techniques.  These are my favorites and since I don’t have an airbrush tend to give me the best results for most of my models.

The wyvern is a bright green but I used a tan color for the wings instead of flat green.

It was a lot of layering, shading, and dry brushing, but I was really happy with the result.

The warboss was actually more fun than the wyvern.

I was particularly fond of how the squig on his shield turned out. 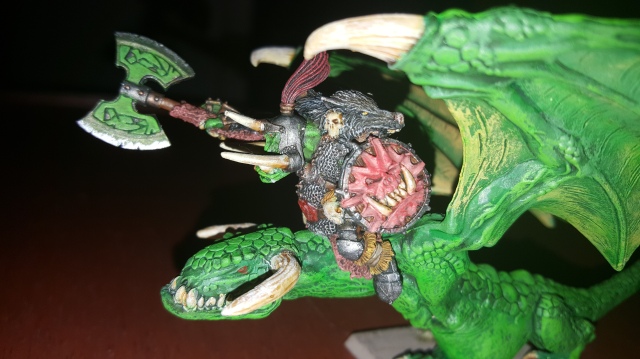 This was a terrifically fun model to paint (and Pacific Rim was the perfect movie to watch while painting). I ended up liking him a lot, even though, admittedly, I mostly wanted to paint this guy for practice since the one I really want to do is this guy.  Azhag the Slaughterer!

This year is DragonCon for me.  My friend Mike has been before and I decided last year I was definitely going to go.  Not only go but go in costume as something.

I’ve mentioned in previous posts that I love the Dredd film from 2013.  A great take on the character and also a design for Dredd that looks reasonable while still staying true to the comic artwork.  I decided this year I’d be doing my first cosplay as Dredd.

After months of buying pieces here and there I’ve got the base for my costume.  I’m still missing some pieces I can put together between now and September and have some work to do on these, but after lots of gluing, painting, and stitching, here is the base for my Dredd: 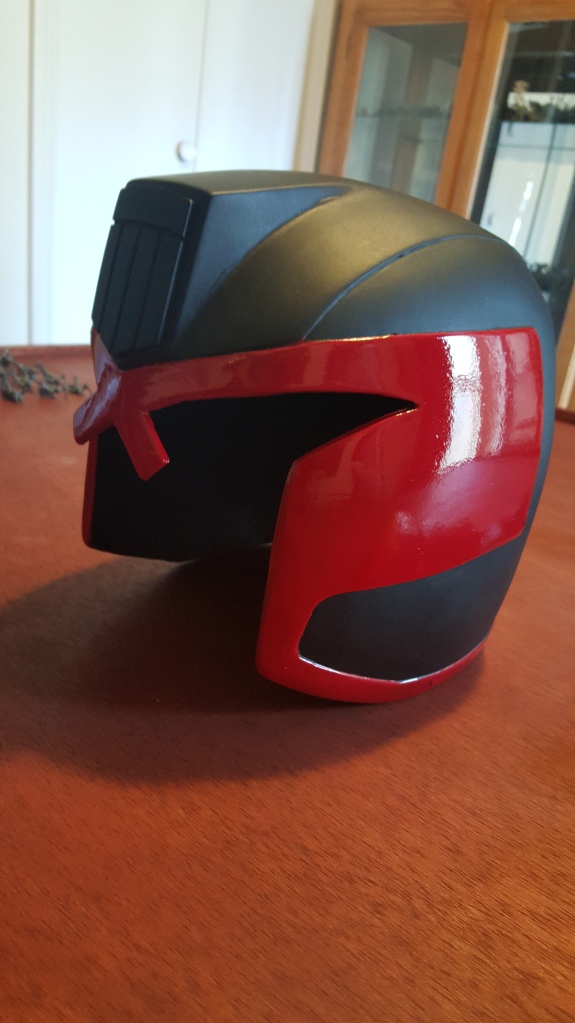 The helmet is fiberglass.  I got it from a UK vendor.  It came in plain grey and needed some trimming, sanding and finishing.  I used a base of Rustoleum matte black primer in a couple coats, the masked off the entire thing except the trim and used Rustoleum gloss red for the accents.  The brass badge is hand painted, I used Citadel Balthasar Gold actually, which matched relatively well with the brass I used in other parts.  I still need to gloss seal the whole thing, add a visor (I’ll use a motorcycle visor) and add an insert that will make it actually wearable. 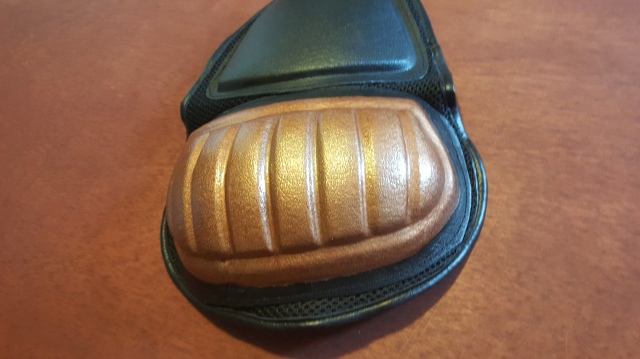 The shoulder pads were tricky.  All my Warhammering got me prepped for textured painting but these are bigger and took some thought on how to mask and paint.  I masked off all the black portions on the left pauldron as a test since it was an easier piece.  It worked pretty well, but because of all the manipulation some gold got under the tape and in other places the tape pulled off the acrylic paint.  I against used Citadel Balthasar Gold and Citadel Abbadon Black for touch ups and it worked pretty well.  The spray paint was more Rustoleum, this time hammered copper. 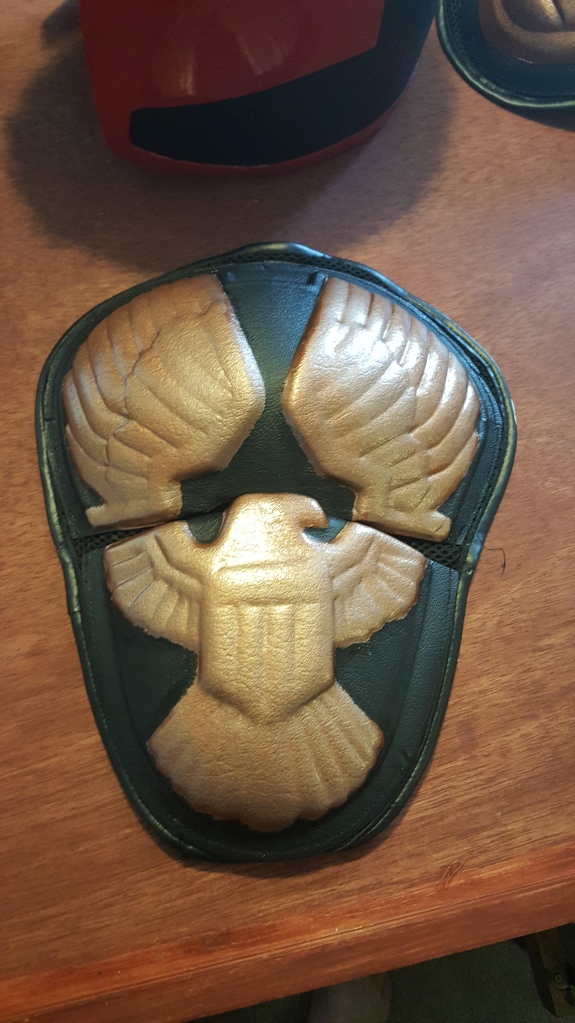 Then there was this freaking eagle…  Masking off this eagle made me insane.  It was already primered black, but adding the gold was a process.  I put in Terminator Genysis and ripped masking tape into various shapes and sizes in order to get it into all the nooks and crannies.  It ended up working pretty well but had the same problem as the simpler pauldron, the ripped tape, because of its frayed edges, didn’t cover cleanly and some gold seeped through.  It was the same process as the other shoulder pad, using Citadel paints to touch up mistakes.  It still came out well. 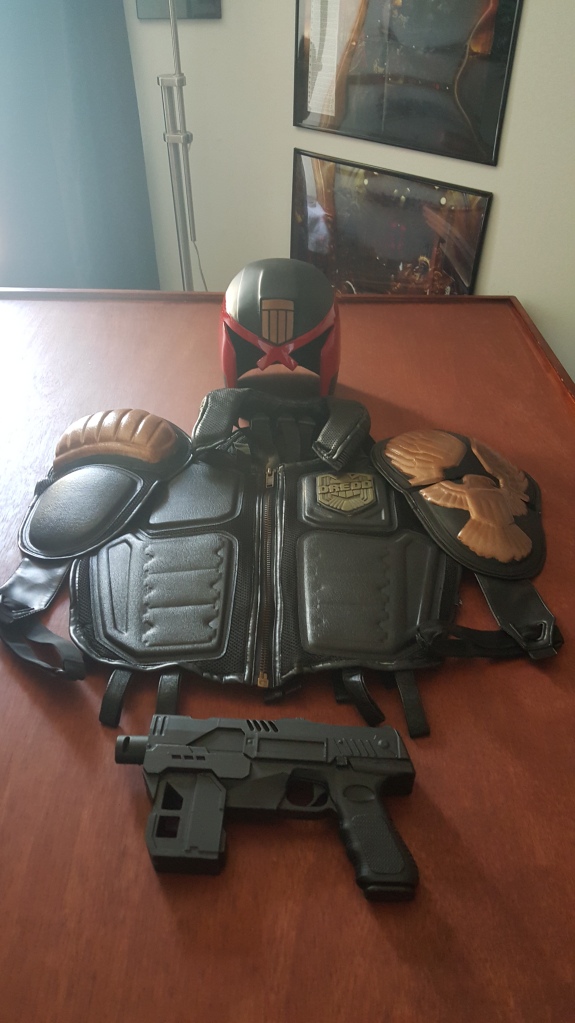 With basing done I’m hoping to finish weathering over the next couple of weeks.  After that it’s collecting the various other parts I need and finishing up the Lawgiver (I’m planning on LEDs in the display screen.)